Just the Three of Us 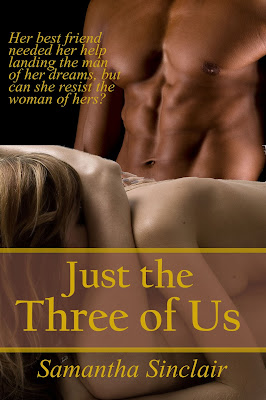 Robin's best friend Gretta is going through a rough patch. Her emotionally-abusive boyfriend dumped her, leaving her an emotional wreck. She convinces Robin that what she needs is to get back in the saddle with office hottie Jackson, but doesn't think she'll have the courage to do it on her own. Robin agrees to go out with them as a group, but when Gretta gets sloppy drunk in order to work up some liquid courage, will Robin be able to resist the years-long crush she's had on her best friend? Or will she take advantage of Gretta being nearly blackout drunk?

Buy it now at:
Amazon
All Romance Ebooks
Barnes & Noble
Kobo
Smashwords
Posted by Unknown at 7:47 PM No comments: