His Watching Wife (The Cuckquean Book 1) 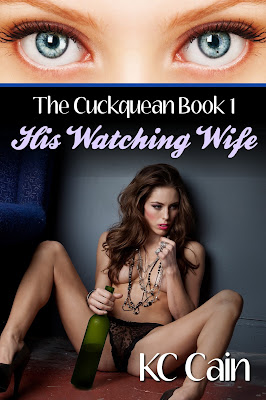 Robert is a kind, old-fashioned man who believes he's in a solid, loving marriage until he finds a video of his wife Lucy cheating on him with some scumbag she met on a swingers' site. Just as he's about to walk out the door and shut it on their life together, she suggests that he do the same thing to her. When he asks for clarification, Lucy spells it out for him:

She wants Robert to cheat on her, record it, and make her watch the entire, humiliating episode if that’s what it takes to save their marriage.

Which is how he finds himself trolling for teen hookers in a bad part of town. But while he's surprised at his own lustful behavior, what he can't believe is how his wife reacts to the video.

Buy it now at:
Amazon
All Romance Ebooks
B&N
Kobo
Smashwords
Posted by Unknown at 4:29 PM